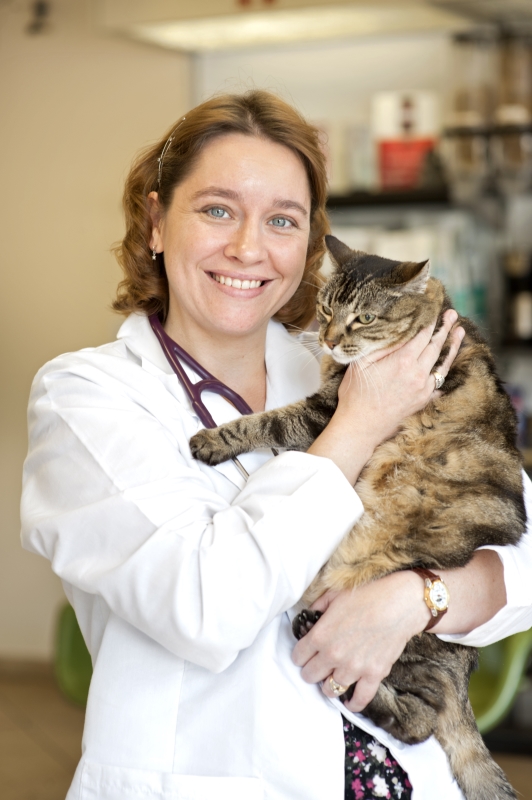 Dr. Theresa Bednar is our Medical Director and a General Practitioner who has been with Rock Road Animal Hospital since 1991 when she started as a veterinary assistant and then as a veterinarian in 1998.

Dr. Bednar and her husband, Craig, have two children, Jessica and Zachary. They also provide a home for German a mixed breed named Milly and cats named Kali and Miss Kitty.

Dr. Bednar’s interests include quilting, sewing, cooking, baking, and seeing musicals at the Fox Theater and The Muny. 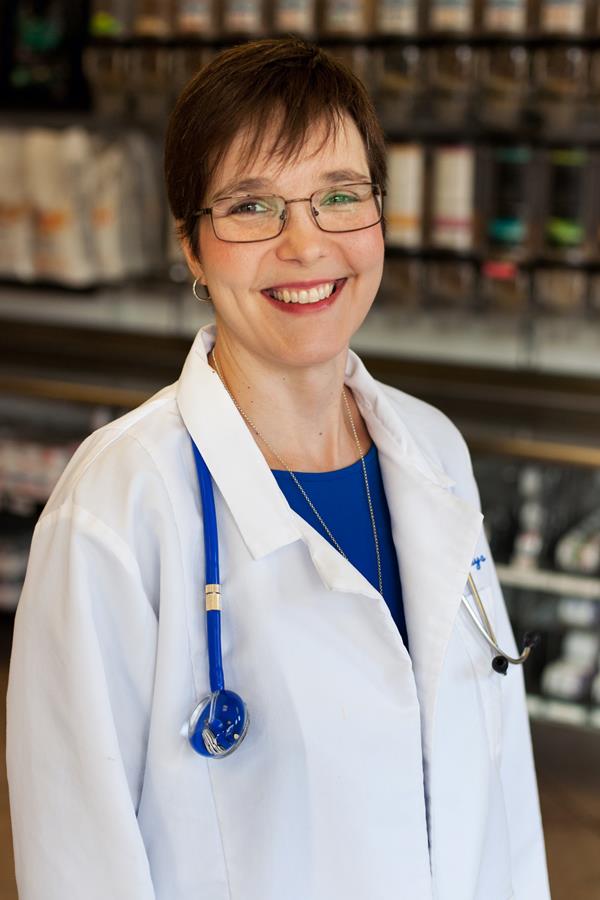 Dr. Deborah Cays is a General Practitioner who has been with Rock Road Animal Hospital since 1991 when she started as a kennel attendant and then as a veterinarian in 2003.

Asked what influenced her to become a veterinarian, Dr. Cays says, “I have always wanted to be a veterinarian since I was 3 years old and I had unbelievable support from my family and friends throughout my life.” Now that she is a veterinarian she says, “The thing I like most is waking up each morning and looking forward to going to work.”

Dr. Cays is married to Dr. Allen Weltig, DVM. They were in the same graduating class in veterinary school, and the couple has two children named Elizabeth and William. Their pets include two cats named Gelpie and Logan (both are rescues), a 3-year-old Abyssinian guinea pig named PJ, a yellow lab named Duncan, a hedgehog named Penny and an assortment of lizards, snakes and tortoises. 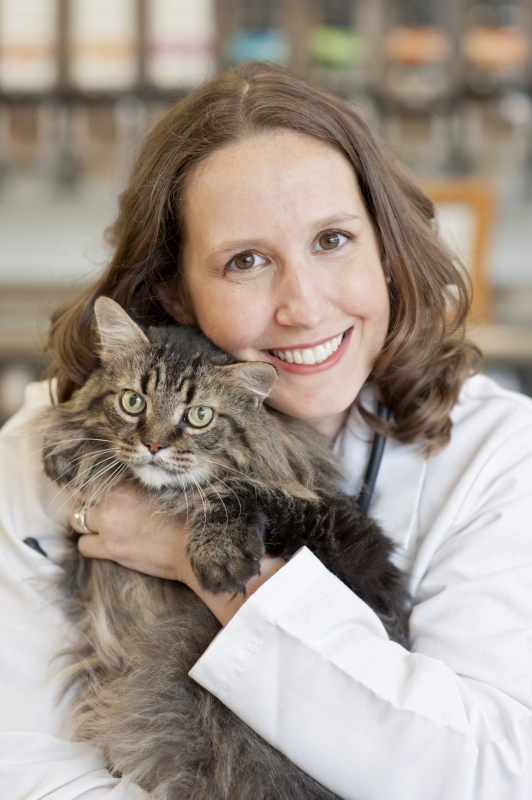 Dr. Paige K. Stroud is a General Practitioner who joined the medical staff at Rock Road Animal Hospital in July of 2007.

Originally from Paducah, Kentucky, Dr. Stroud says that the desire to become a veterinarian solidified during her time at a local veterinary hospital. “I worked with a young, ambitious veterinarian during high school and college,” she says. “She was 5’4″, confident, in charge and taught me that veterinary medicine has a place for women.”

Dr. Stroud and her husband, Steven, a computer programmer, met while attending Murray State University and they have a daughter named Ada. Their pets include two cats. Her interests include reading, gardening, yoga, travel and going to the movies. 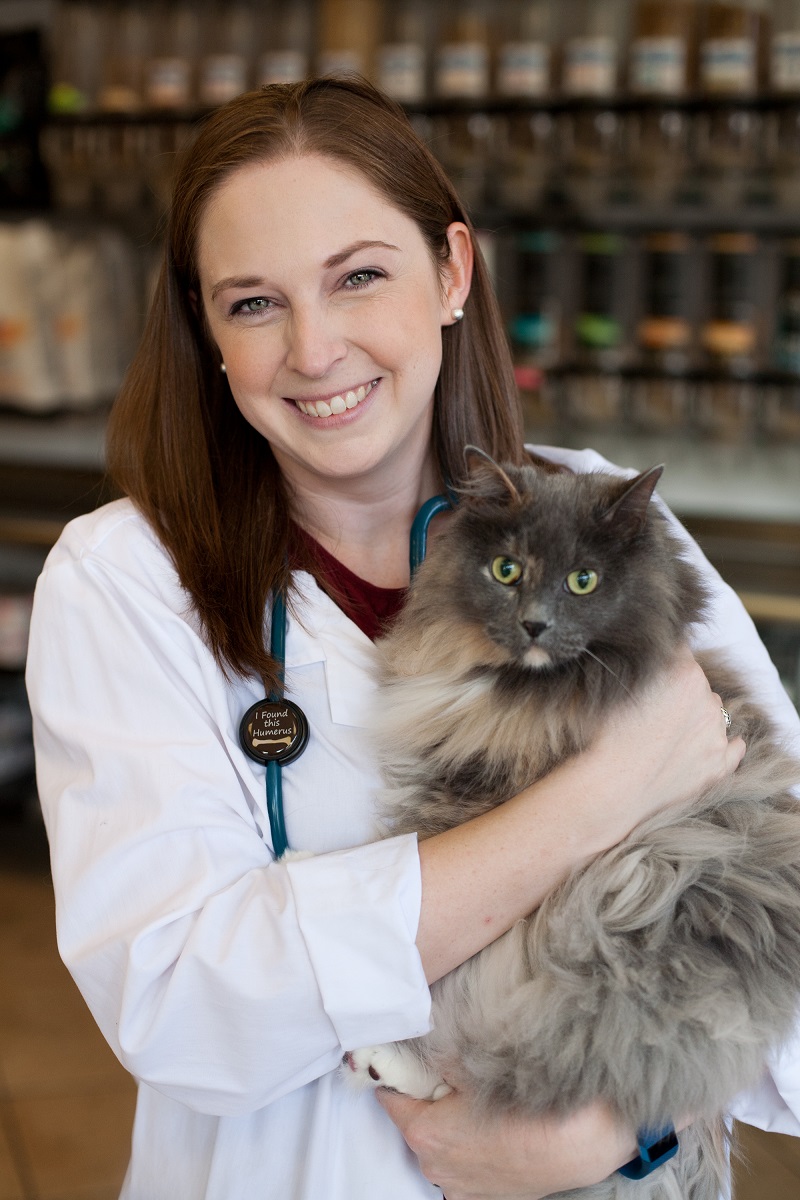 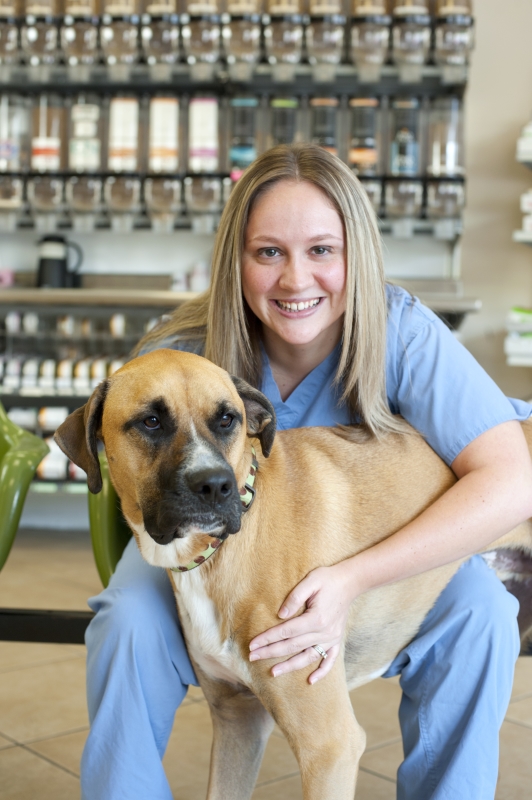 Amy H. is a Receptionist and says that our staff is great and she very much enjoys working with our clients and their pets. She has been with Rock Road Animal Hospital since August of 2005. 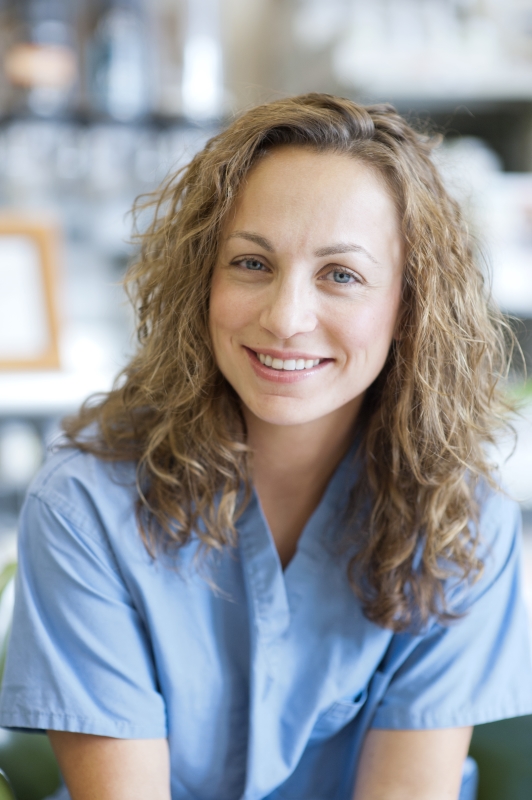 Lauren C. is our Hospital Administrator and has been with Rock Road Animal Hospital since August of 2006. In addition to her many years of experience, she has a Bachelor of Arts in Marketing and Communications from the University of Michigan.

“I love when I see clients so thrilled to see their pets after surgeries or boarding with us,” she says. “I feel proud when a client actually takes my advice, whether it is about a flea preventative or how to potty train a new puppy. I really just enjoy helping our clients any way that I can as well as to help educate them as best I can about their pets.” 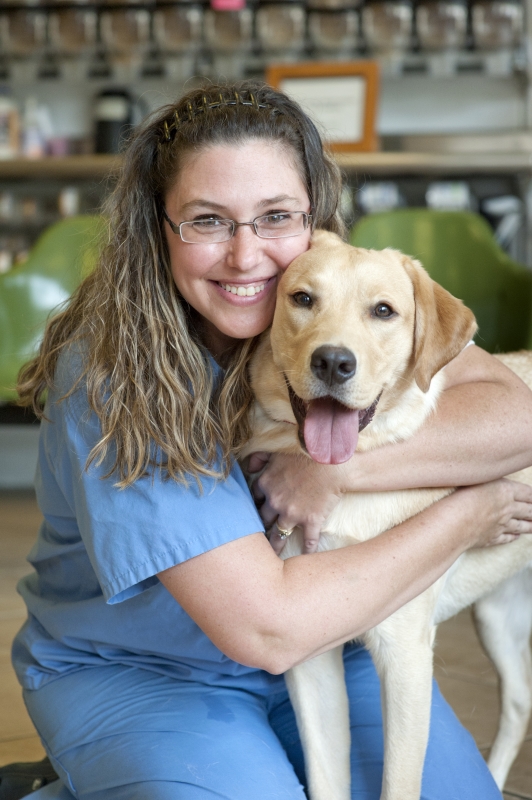 Carrie G. is a Surgery and Hospital Technician who has been with Rock Road Animal Hospital since August of 2001. She is working toward her certification as a Veterinary Technician.

“I take my job very seriously and feel that this hospital has become like a family to me,” she says. “I enjoy the staff and clients here very much.” 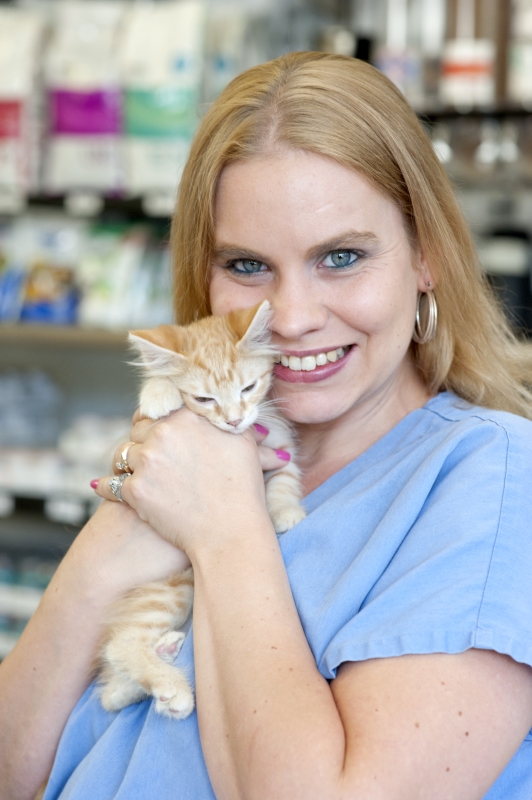 Michelle H. says that as a child she visited our facility with her father and the family pets and was fascinated by the equipment and the care her pets received. Since October of 2002, she has been part of the Rock Road Animal Hospital staff as a Receptionist and our Billing Manager and enjoys the opportunity to make animal care her career. 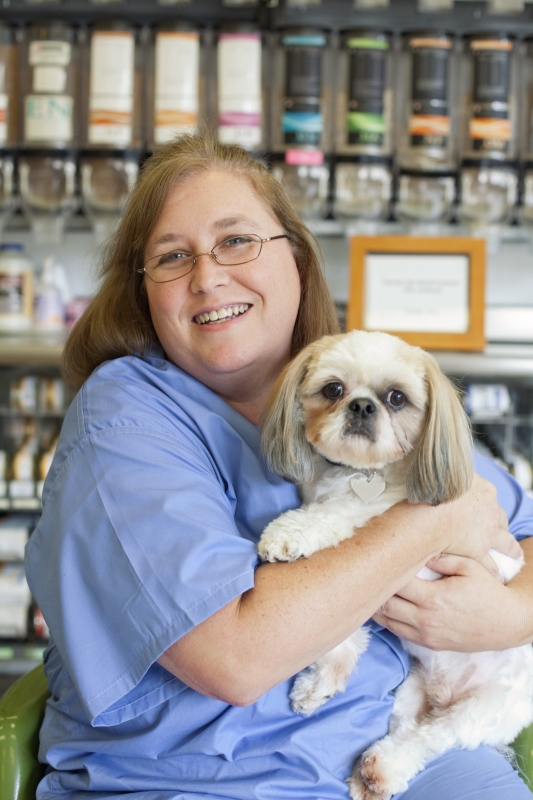 Michelle L. is a Surgery and Dental Assistant who says, “I love it here because the doctors and staff here are like family. Even outside of work we spend time together and have fun.” She joined the Rock Road Animal Hospital staff in October of 2001. 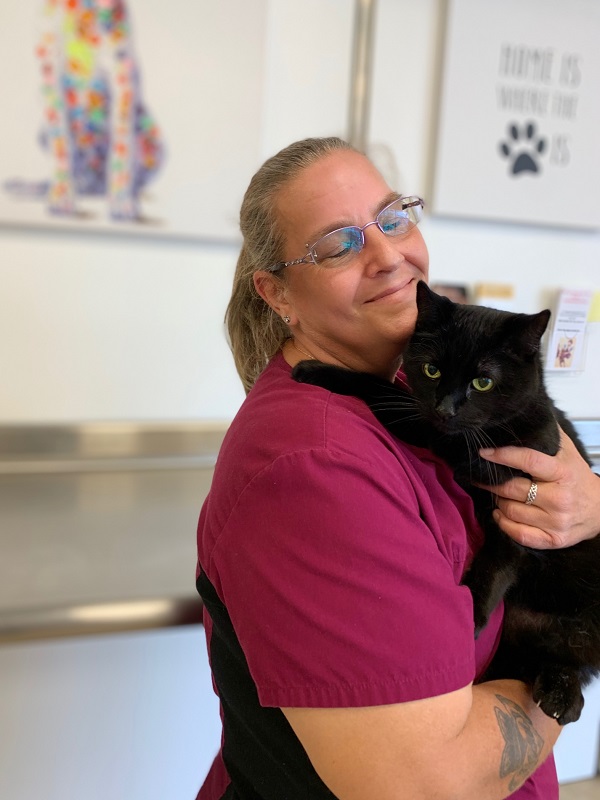 Donna L. is a Veterinary Assistant who has been with Rock Road Animal Hospital since August of 1996 and says our hospital has become like a second home.

Donna has a yellow Lab named Remy, a boxer named Cara, a Labrador mix named Maze, and two cats, Ozzie and Piper. Her interests include spending time with her two daughters, going to movies, reading and going to ball games. 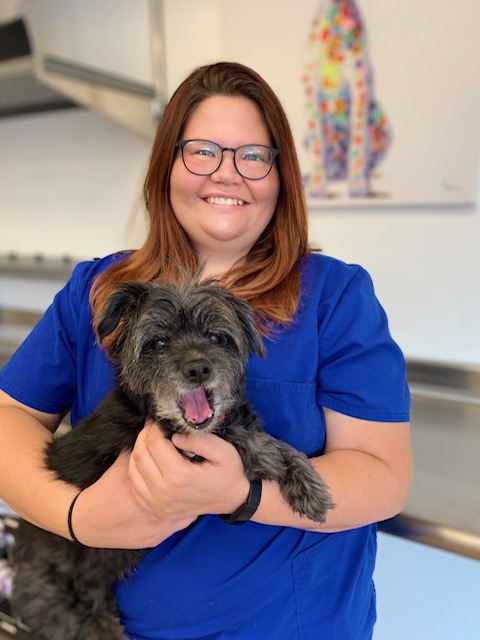 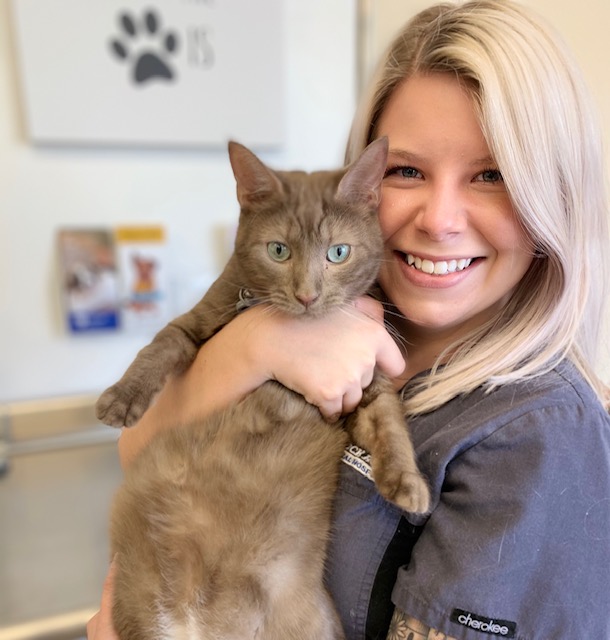 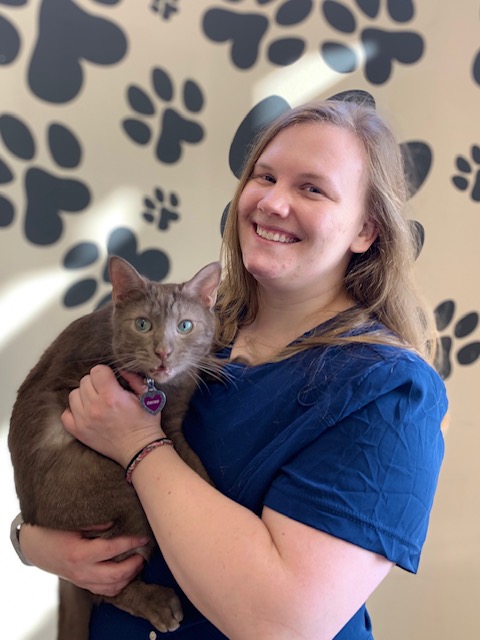 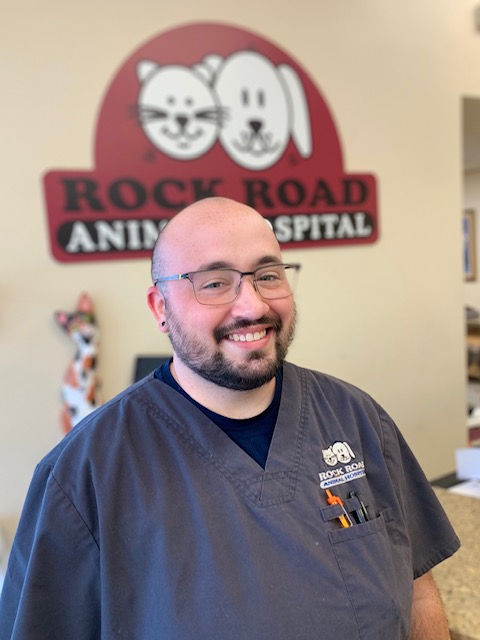 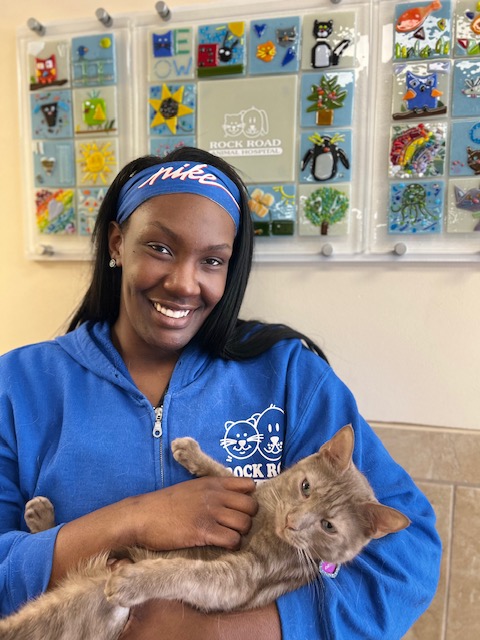 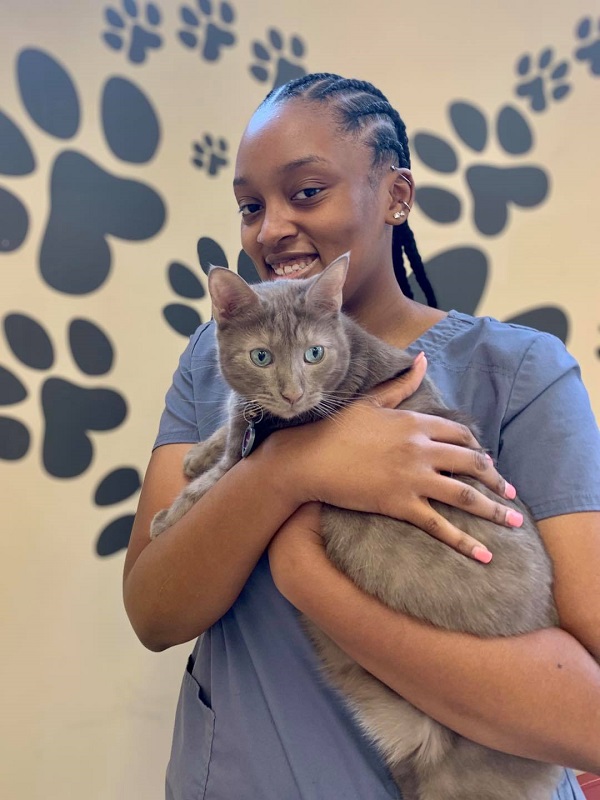 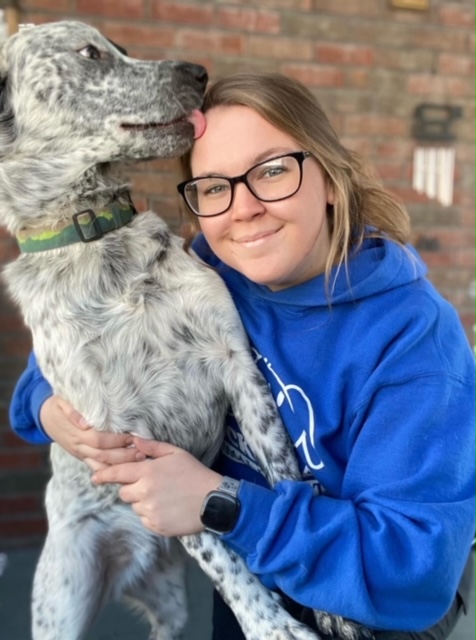